The Sama Dynasty of Sindh & The Mamai Dev 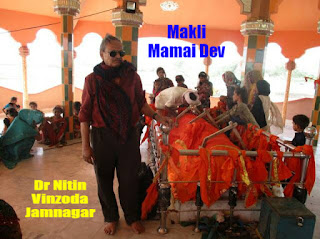 The Mamai Dev was a great philosopher and predictor in 14th century, He was born in India.He  NIRVANA on   Vikram Samvant 1472.in Thatta.Sindh. ( reference from  shrines of Maheshwary Meghwar Sufi Saints holy book written by Dr Mohan devraj Thontya, PhD, Professor of history in  karachi university;) The Mamai Dev preached toPoor downtrodden poor peoples of Sindh, Kutch, Gujarat and Sama kings of Sindh, now Sindh is in Modern Pakistan,there were rising of Islam in India during 13th century, The Sama were descended from Rajput race,and  Few Sama converted Muslim, remaining Sama son of Jadaji Sama descends as Jam Jadeja Rajputs and ruled over the Saurashtra Gujarat, Sama were Rebellion led by Rajput Unar who was the founder of Sama dynasty,The Sama overthrew the Soomra Dynasty In 1335 AD,The Unar was power ruler of Sindh,Punjab and Baluchistan,Sama dynasty started from 1351 and ended in 1551 AD, Sama was known as Jam which was equal to Sultan or King,Tattha was the Capital of Sindh .The Sama dynasty left its mark in Sindh,with magnificent structure including the World largest necropolis
Makli Necropolis Graveyard  is UNESCO world Heritage site and 125000 Sufi Saints. Philosophers and kings ,Queens,princes are buried in the Makli Graveyard.The Sindh is fertile valley of ancient and oldest Indus valley civilization,The Bamaniya  Sama was the son of Jam Tamachi, he ruled over Sindh from 1352 to 1367 AD. The Mamaidev sacrificed his life for dharma to Bamaniya Sama, Bhamania sama was converted from Hindu Rajput to Muslim by the Force of  Alahudin Khilji invaders and The Khilji ruled on India and  force to Bhamaniya Sama  for Beheaded of the Mamai Dev but the Mamai Dev was a great Sufi Saint after Beheaded the Mamai Dev had walked  his Last Journey with his head was with his both Hands and trunk and Preached 9 Lack Vedas to his  Followers Maheshwary and others from Tattha City to Makli Grave yard almost 15 KM and decided his Burial place in the Makli Grave Yards. He sacrifice his life for the welfare of poor peoples of world Sinbhariya Meghwar, The Tomb of Great Mamai Dev is located in Makli Graveyard in Sindh Pakistan,
The Mamai Dev said his Vedas:- 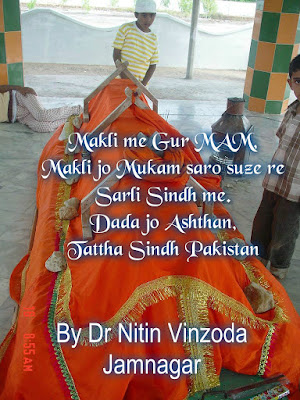 Hinduism Philosophy &  According to Law of karma the Mamai Dev has to repay revenge to Bhamaniya Sama King  for previous Birth; the Mamai Dev in his previous Birth was a Rashtikhan Badshah or King In Khambhat Desh Gujarat India.during his ruling  time a Mulla a head of prayers was injustice and given Death order death sentence and Mulla was  Hanged to death and after death that the Mulla was Born in his next incarnation as Bhamaniya Sama son of Jam Tamachi  in Sami Nagar Tattha and Rashtikhan Padshah was Born in Kutch, Gujarat India as The Mamai Dev so that  according to law of Karma  Shree Mamai Dev Repay revenge of previous birth and given permission to Bhamaniya Sama for his death sentences.The Mamaidev was Nirvana and left this Mortal world.
Rebirth, Hinduism maintains, is governed by the law of karma. According to this law, man is the architect of his own fate and maker of his own destiny. Karma signifies the way of life, that is, what we think, say, and do and it brings conditioning of the mind, the root cause of embodiment.
The Mamai Dev was a great philosopher and future predictor  He was Born in India 13th century,He predicted about Earthquake,Tsunami and Firestorms and Global warming which will effect on the Environment and climate on the Earth,His Nirvana Destination is in the UNESCO World Heritage site  Makli Necropolis,( graveyard) in Tattha,Sindh, it is a largest Necropolis in the world,Makli Hill is supposed to be the Burial place of some 125000 Sufi Saints. Philosophers,Kings and Princess The Tombs and Graves are Materials documents

marking the social and political History of Sindh;The Makli hill is Ancient Necropolis, Graveyard and world Heritage in the world,It is 100 K.M. from Port city Karachi Sindh on the highway Hyderabad,The Makli Grave Yard is approximately 8 km in area,The Makli hill is a Ancient Necropolis believed to be in the era of Indus Valley Civilization.The Mamaidev"s Destination is in the Makli Grave Yard, The Mamaidev last rest in the Makli Grave yard in Sindh Thatta.his Tomb is situated in Makli Grave yard,
He preached to Meghwar and King Shama Bamniya and poor Meghwar and others peoples of Sindh Ruler kings of Sindh,Sama dynasty,his grandfather Matang Dev preached to Sumara king Dynasty of Sindh, rebellion Jam Unar shama attacked on Sindh and defeated sumara king Soomra  were followers of Matang Dev and Lunang dev, while Sama were followers of Shri Mamai Dev,He preached to Maisaria Maheshwary Community of Sindh, Gujarat and  other states of India,  Jam Jadeja Clans Dynasty is descends from Sama Rajput of Tattha, Saminagar of Sindh. Jam Jadeja ruled over the Kutch and Navanagar ,Jamnagar and Morbi and Rajkot state of Saurashtra, Gujarat.
Ra Navghan king of Junagadh, Gujarat. and king of the Ghumli Jethwa ;He preached 9 lacks Vedas and predicted Future events  which will effects  on the world, I pay Homage to Great Mamai Dev who predicted on
Earthquakes,Tsunami,Global warming and fire storms from the sky Galaxy. He preached for compassion towards suffering peoples of world,He has given right path for happiness for the peoples of world, he said "As you sow so shall you reap"Below is the image of Ancient Ghumli in Saurashtra region of India,during 12th century Ghumli State was ruled by Jethwa Rajput king  & dynasty of Saurashtra, Ancient Ghumli was attached by Jam Unnadji king of Sindh,he was defeated by Jethwa,than against the son of  Jam Tamachi the Bhamaniyo shama attacked on Ghumli and he defeated king Bhan Jethwa ruler of Ghumli State,he reign on Ghumli state, Ashapura Mataji  temple of Ghumli was built by Bhamaniyo shama of Sindh,
The king Jethwa of Ghumli Gujarat India were the follower of Shri Mamai Dev,The Mamai Dev was remain and done Tapashya many years in Ghumli with his sons Meghanand and Merchant; he lost his Younger son  Marchant in war between Alahuddin Khilji and Ghumli King Jethwa,It is the memory of Mamai Dev in Makli and Gadh Ghumli, Saurashtra India, 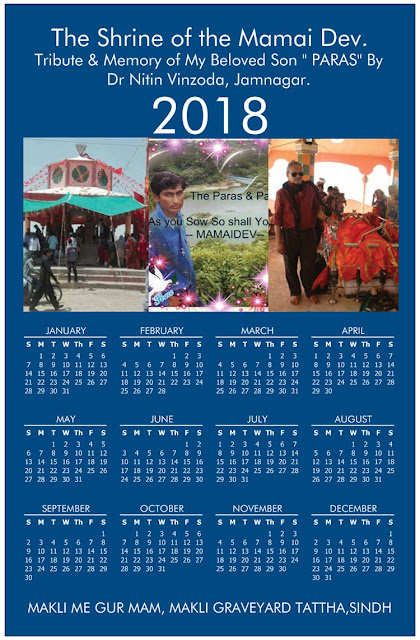