The Mamai Dev was born in India in 13th Century,He was a Great Philosopher & Sufi saint of Sindh now in Modern Pakistan,He preached to poor Sinbharia Meghwar Tribal Community of India which were known in ancient India as Sinbharia Meghwar ( સીભરિયા મેઘવાર )a Tribal caste or  Races of Asia they are the original inhabitant of ancient India also popular known as Dravidian races in history of ancient India, history writer were Aryan so that Sinbharia Meghwar are neglected by History writer but a great historian Rahul Sanskratyan had written about Aryan and Tribe Sinbharia Meghwar in in his historical book Volga se Ganga and he travel from river Volga of Tajikistan of Russia and Iran and he had written real history of Tribal Sinbharia Meghwar and Aryan.The invaders Aryan peoples came from middle Asia countries ie. Iran,Tajikistan Russia from valleys of river Volga to river Indus and Ganga,they were came with theirs Cattles and Horses and attacked on Sinbharia Meghwar which was a tribal race of  ancient India and they Occupied the forest and rivers,Lakes and  Fertile lands of Valley of Sindhu/Indus and Ganga river of North India of Sinbharia,Tribal Meghwar and they started spreading their Vedic dharma religion in north India,
Archaeological evidence from the 1920s concerning the ascension and demise of the ancient polytheistic Indus civilization( 3500-1700 bce) gave rise to the evidence of Invasion of the Indus and Ganga regions by Aryan peoples who Migrated from Middle Asia through the valley of Volga river to Ganga river and Indus river and Aryan invaders settled in Haridwar in North India,Aryan were cruel to Sinbharia Tribal people and Aryan were trained in Gorilla technique of fight.The Sinbharia Meghwar were actually Peace loving peoples of Original inhabitant of India when Aryan invaded on north India they


pushed the Sinbaria Meghwar and Dravidian to the southern parts of India as Aryan were skilled fighters and came prepared with weapons and chariots.also Dravidian and Sinbharia Meghwar were sophisticated culture and used to worship all form of like Herbs,Plants,Rivers,lakes and Mounts,and they believed worship to their Ancestors.
the Mamai Dev given Education to the Poor Tribal Caste of India for to improve their Culture,Customs and Communication and how to get lively hood and how to behave with their society as Noble human beings,The Mamai Dev given path of Happiness and dharma to poor Sinbhariya Meghwar,for pure body and mind, The  Mamaidev had given holy word Dhammachar means you behave like a noble human free from delusion,hatred,greed,not to kill,not to drink wine and Respecting the Living World to protect Environment.
He Explained the theory of Cause and effect,"As you sow so shall you reap"the Sinbharia tribe were hunting animals for their food there were no horticulture or agriculture in the ancient era of ancient tribal India because North Indian continent were full of dense forest and Mountains of Himalayas.there were Animism but Mamai Dev preached them not to kill animals and Living beings,he said in his sacred Vedas that you cultivate forest and fertile Lands of Sindhu and Ganga river and sow seeds and plant will grow and corps harvest will give rise foods, like vegetables and grains,fruits to you and your family.and Grass on the fertile lands ground of river will give feed to their cattle.
The Mamaidev had given education to Sinbharia Meghwar for their Unity and struggle for their survival on the Planet Earth and to protect Girl child and Women.the Mamai Dev preached them for equal rights of women in Society.so that Sinbharia lively hood was largely depend upon forest and hunting the animal for their food,The Mamai Dev preached and given Education to Sinbharia Meghwar for respecting Living world.birds,animals,and other Sentient beings or living beings on the Earth,and also respect to Rivers and lakes.
the Mamai Dev also Mentioned in his sacred scripture there are more Vedas on 999 rivers and Man Sarovar Lakes and Mount Himalaya,There are Many Vedas written by the Mamaidev in his sacred Scripture on RESPECTING  LIVING WORLD in his Sacred Scripture, he Preached to Sinbharia Tribal Meghwar for Not to kill living Beings,Not to drink wines and not to play gambles and they were Living in forest as primitive lives and they are the beginning of human culture and evolution is still found in Tribal races of east India,Nagaland,Orissa,Madhya Pradesh,Chhattisgarh and,Gujarat,Bengal,Andhra states of India.
Hunting techniques :-From the ancient days till the present era hunting as an occupation, prevalent in almost all societies. Anthropologists normally applies the term hunter only to the group who depend primarily upon hunting game for their food. Hunting was practiced as a means of livelihood since long past. Before entering into the forest the hunters divide themselves into two groups, one group possesses their hunting implements and other group with some TRAP and (phasa) (ફાંસલો) enter into the forest. They make different kinds of sounds. Due to the noise the big animals are compelled to run at the desired direction of the hunters and they easily kill them with the help of bow and arrow. In the second method they go to the jungle and prepare a platform of wood on the branches of the tall trees. They call the platform
as‘machada’from this Mancha (માંચડો ) they shoot down the animal by Arrow and bow from the height.The third method of hunting is by the help of traps.They are used various types of traps for hunting different animals. Before the initiation of hunting the hunter set those trap ready. Then they go to the other part of the forest and scare the animals by showing fire,beating drums and making abnormal sounds by other non verbal methods;whistles and verbal Animals sounds.
They communicate each other by making  various sounds ie. cry,roars, thunders and respecting persons with touching head or body parts of another person.there were no religion and they believed in supernatural belief, there were no any Gods like person came in Era of Karta yuga,tetra yuga,Dwapar yuga,there were darkness in the life of Sinbharia community,Gods were born in Hinduism and they have done welfare for migrated Aryan peoples of India.only Shri Matang Dev and Mamai Dev came to the Sinbharia community they fought for the uplifting of Sinbharia caste.
the Matangdev and Mamai Dev had given BARMATI panth dharma religion to poor sinbharia, the Barmati religion is for the Purification of Mind( soul) & Body.the Mamai Dev said in his Vedas:- jee jal me pandhi(Body) pakhario tee Barmati ai anje jiv jo pakhar.જી જળ મેં પંધી શરીર પખારીઓ, તી બારમતી અ 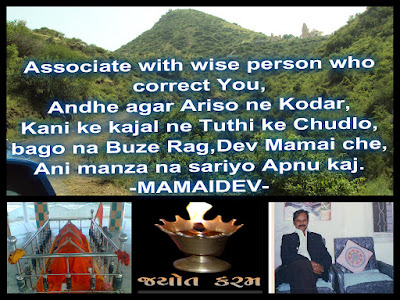 ઈ આજે જીવ જો પખાર.He said the the water is the purification of body and Barmati is for purification of your soul. He said to sinbharia that you clean your body daily by fresh water daily and keep healthy body and free from any illness, and preached for respecting the living world,like plants,tree on the earth & sentient beings.