The Mamai Dev was a Great Philosopher and Predictor of future events and Sufi Saints of India,he was Born in  Matarai,Kutch Gujarat,India in Vikram Savant 1387/ 1330.A.D. century and Nirvana in 1415 A.D.or Vikram Samvat 1311/ Month of Vaisakh and Sankashta Chaturthi Choth according to Hindu calendar and The Mamaidev was killed and  Beheaded by Sama Bamania Ruler of Tattha,Sindh, according to  Mamai Dev"s Sangath choth Vedas:- samvat 13 termu ne varas 11 agiyarmu, teni Gur Gamtedo kiyo,mas vaisakh ne tithi andhari choth ne sukravar/ friday,shukravar jo sath shambhudo unadsi chaday thath,sir Truto ne dhad ham tanu bole ai puchho  vigat ne vat,Mot Vera Dev Mamai Bhane Nij Karam je Adhar...
He sacrificed his life for Dharma and  downtrodden poor Sinbharia Meghwar of India.This Data is taken from . a Holy Book "Shrines of the Maheshwary Meghwar Saints in Sindh" this book is Published by Information and Archives Department of Govt. of Sindh, written by  a Scholar Dr Mohan Dev Raj Tonthya PhD and he is a great Historian of Karachi Sindh. He worked for Barmati Panth Dharma and  he submitted the Barmati Path of Maheshwary Paper in Germany world religious Conference.  The King of Rao Navaghan and the Sinbhariya Meghwar of Junagadh were the followers of the Mamai Dev, Rao Navghan was the King of Junagadh from Chudasama Rajput dynasty he ruled Junagadh state and he fought war with  Hamir Sumara  king of Thatta Sindh for to save his Sister named Jasal was abducted by Hamir Sumara, he killed Hamir Sumara king. to day there are Historical wells or  Kuva water reservoirs are preserved amazing architecture of Adi Kadi Vav and Navghan Kuvo., and lake in the old fort city which is well known as  Fort or Uperkot of Junagadh, Adikadi Well and Navghan well were built by King Rao Navghan
UPERKOT - Fort  is an impressive fort located on a plateau in the middle of town. It was originally built in 319 BC. Visitors enter the fort through a large gate. Some parts of the fort’s walls are 20 m high.

Further down the road are what are believed to be old Buddhist caves, said to be 1,500 years old (dating from before 500 AD). They are carved into the rocky hill and have stone carvings and floral work. There are also the Khapra Kodia caves north of the fort, and the Babupyana caves south of the fort.
There is a huge, fifteen-foot cannon, made in Egypt in 1531. There are also two interesting large step wells (vavs) here. The 11th century Navghan Kuva has a circular stairway that descends over 50 m down into the well. The Adi Kadi Vav descends 170 steps and Local Peoples are believed that You have"t seen a Adikadi Vav and Navghan Kuvo your journey on the Planet earth is useless. 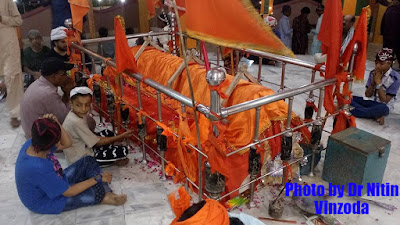 Doha in Local Language:--જેને  ના  જોયો અડી કડી વાવ ને નવઘણ કુવો તે  માણસ જીવતો  મૂવો  મરેલો.
,The Junagadh district is world famous for Last Abode  Majestic Home for Royal King Asiatic Lions and Sasan Gir is as Wild life Lions Sanctuary and Gir National Park
,Besides Africa the Sasan Gir, Gujarat is only place where you can spot Lions are Roaming free in Wild forest and surrounding Villages of Forest,It is highly protected area in Asia, Total Gir  forest is 1413 sq Km and approximately 400 sq Gir National Park and there are 523 Lions in Sasan Gir Forest among 106 Male,201 Female and 213 are cubs sub adults;  the Lions are freely moving in surrounding area villages of Gir forest and hunting for prey the domestics Animals ie Buffaloes, Cows, Sheep, Goats ,cattle of Farmer and Cattle owner known as MALDHARI in Local Language, our Gir Forest is Paradise for the Wild life and  Memorable experience for visit our Sasan Gir National park Junagadh;